I'd like to start off by saying that today has been a great day, and it's all thanks to DazedDigital. To begin, we were given a new film from Collapse Into Now - which up until earlier today had been a tight-lipped secret. However, I can now reveal it to be Walk It Back:


As much as I'd like to review this video, I'm having trouble loading it. The opinion of the majority seems to be that it is utter crap, but I'll leave you to decide that. Anyway, we still have much to get through!

The next thing that DazedDigital gave us was perhaps the most unique and special one of all. If you weren't aware of it, then I'll fill you in. R.E.M. fans at 1pm GMT were given the opportunity to actually participating in a live chat with Michael Stipe himself! Even if that didn't set your pulse racing, it was for me at least the cause of some extreme excitement. I knew I had to be there this time - I became a fan in 2009, just after the Accelerate tour, the Supernatural Superserious video remixes, the TV performances... I was crushed when I found out what I had missed. This time, I vowed that things would be different.

Sadly, there were a number of obstacles that stood in my way:
1. The chat was during school time, at lunch.
2. Facebook, which was being used for the chat, is blocked in my school.
3. The sheer number of people that were bound to arrive if I didn't get there early would mean I wouldn't be able to get on the chat.

Something had to be done. Thankfully, my mum is a teacher at the school I go to, meaning I could use her login in which Facebook is not blocked. However, I just had to trust my luck with 3 and in the case of 1, I just missed lunch and prayed that the room containing the computer I was using would not be discovered by a teacher. The plan was in place, but concentrating during the morning classes was near to impossible. The clock ticked idly by, prolonging my suffering time and time again. Nerves shook my body. I needed to be there!

Surprisingly, I turned out to be the second person to arrive at the chat, despite it being on eight minutes before  Michael was due to arrive. Soon though, the conversation was flooded with people from many countries (I counted at least three from the UK). One of the employees at DazedDigital informed the wildly-expanding crowd that Stipe was on his way to the company's offices in London, and he would be about five minutes.

Alas, at 1:10, ten minutes after the start time, there was still no sign of our favourite frontman. I did my best to help keep the crowd busy, asking questions such as what everyone thought of the album, who was a fanclubber here, what their favourite song from Collapse Into Now was etc. (The answers to the latter question, if you're interested, seemed to be mostly UBerlin.) But even with a healthy conversation going, it was easy to tell we were getting agitated. Where was he? Where was Michael Stipe?


At eighteen minutes past one, we got our wish. A user, "Rem Dazed", appeared on the chat - his profile pic was of the man himself. He was here, at last! Instantly, the whole chatroom went crazy, overwhelmed with excitement and happiness at his arrival, myself included. We thanked him for giving us the chance to talk to him, and told him what we thought of the new album. He thanked us for our comments on Collapse Into Now (which were, of course, extremely favourable) and allowed us to ask our questions.

To be perfectly honest I didn't even expect a reply. There were so many there that the school's crummy Internet connection almost couldn't handle it. Fingers crossed, I posted my comment:

"I have a question about the sound of the album, which is very ambient. Did you know early on how you wanted it to sound, or did it just develop naturally?"*

My comment disappeared under a mound of others. No way was he going to see my question. But it turned out I was wrong:

"to Lewis, we had no idea what is was going to sound like.."

My heart skipped a beat. Not only did Michael personally answer my question, my question was the first one he answered.

And he used my name.

Instantly, I was hit with elation. It was all worthwhile - I chatted to Michael Stipe! He answered my question first! He used my name! (Which you now all know. Sigh - that's what I get for directly quoting.)

To any casual or non-R.E.M. fan, this whole thing probably doesn't sound like a big deal. But to me, the boy who has spent literally months living and breathing the band, it has been the highest point in my fandom so far. Soon, more people joined, my Internet connection slowed even more - something that didn't even seem possible - and Michael was struggling to cope with the sheer amount of traffic on the chatroom. The poor guy was forced to answer questions from five minutes ago. It was hectic.

But a lot of good questions were answered in this chat. Here's a couple of pieces of interesting information that came from the event:


He even answered a second question of mine! I asked him what his website, Michaelstipe.com was about. If you've ever been there, I'm sure you'll understand why I raised this question. Again, in his own words:

"Michaelstipe.com is a record of a year of looking at my computer"

Pretty neat stuff, eh? Sadly, my school's Internet packed in about two-thirds of the way through the chat. But I was happy. He spoke to me - as cheesy as it sounds, I think everyone there today was especially pleased of connecting with Michael. I know I was!

Finally, as if that wasn't enough, DazedDigital gave us another video - Alligator_Aviator_Autopilot_Antimatter:

Err... interesting! Its weirdness reflects the strange lyrics, in a way.

So, that's it for now. My adrenaline has fuelled with writing of this post, but I must go as Michael is appearing on The One Show in 15 minutes. Apologies for making you sit through my giddy speech, but I'm riding the excitement 5 hours later. Goodbye!

*This may not be the actual wording I used. Thankfully, I have a saved copy of what I typed, so I'll update this page later with what I said.

UPDATE 2: Here's a couple of screenshots I took of the chat, with Stipe answering my questions. Just in case you doubted me! 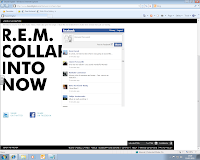 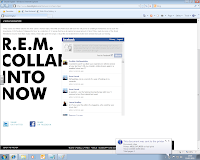 Auctioneer
I'm an R.E.M. fan living in Scotland, and I collect bootlegs and rarities.

Some other R.E.M. sites